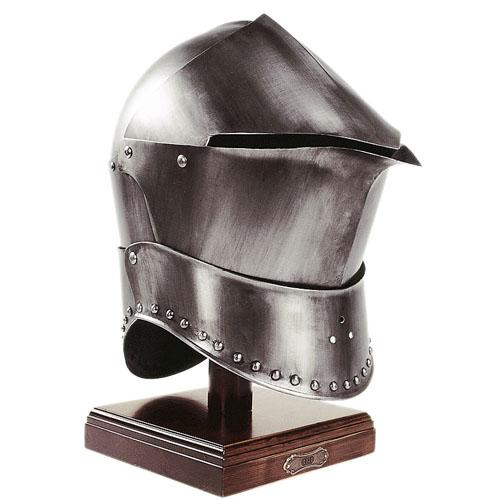 Frog-mouth Helm, was primarily used by mounted knights for tournaments (jousting) rather than on the battlefield. Frog-mouth Helm, Great pelvis open field characterized by the peak angle in the middle and protruding.
Manufacturer: : Medieval Armor
Product SKU: 002/H10.03

During jousting tournaments, the helmet offered a better degree of protection from lances that would splinter after impact with the rival's body armour. Early examples of the stechhelm were made from a single piece of metal, while later dated helmets had hinged constructions that could be disassembled.

The frog-mouth helm the helmet was primarily used by mounted knights for tournaments (jousting), it was a type of great helmet, which dates back to 1400 and lasts until the first quarter of the sixteenth century.
The analogy with the frog's mouth was drawn by the way the ocularium (the fissure through which the wearer could see) resembles the open mouth of a frog.

The Frog-mouth Helm (armet) possibly of German manufacture was developed in the 15th century, the first helmet of its era to completely enclose the head, used in England, France,